How it is happening? Will it burst? How do we can handle it?

One of the patterns I have seen throughout my working life is that we seem to have a specific way of adapting to new technology that creates technology “bubbles”. On the surface, you might think that a new technology is developed and if it adds value to our business we will implement it. But the reality is much more complicated.

I am going to make two predictions. The first prediction is that the future is digital. That is not a very difficult prediction since digitalization has crept into many areas of our daily life already and all indicators are that the trend will continue. The other prediction may not be quite as obvious. I predict that we are currently in the middle of a digitalization bubble. I may not be enough of a “guru” to know if this bubble will end with a boom or a fizzle but I am sure it will deflate in some way.

So how can I reconcile my two predictions? One prediction that digitalization is here to stay and the other that we are in a digitalization bubble. Experience tells us that we have a very specific pattern when it comes to adapting to new technology. In my work with change management I have seen that our acceptance of new technology, which impacts our existing processes or business models, follows closely with the traditional change curve developed years ago, by Scott and Jaffe. 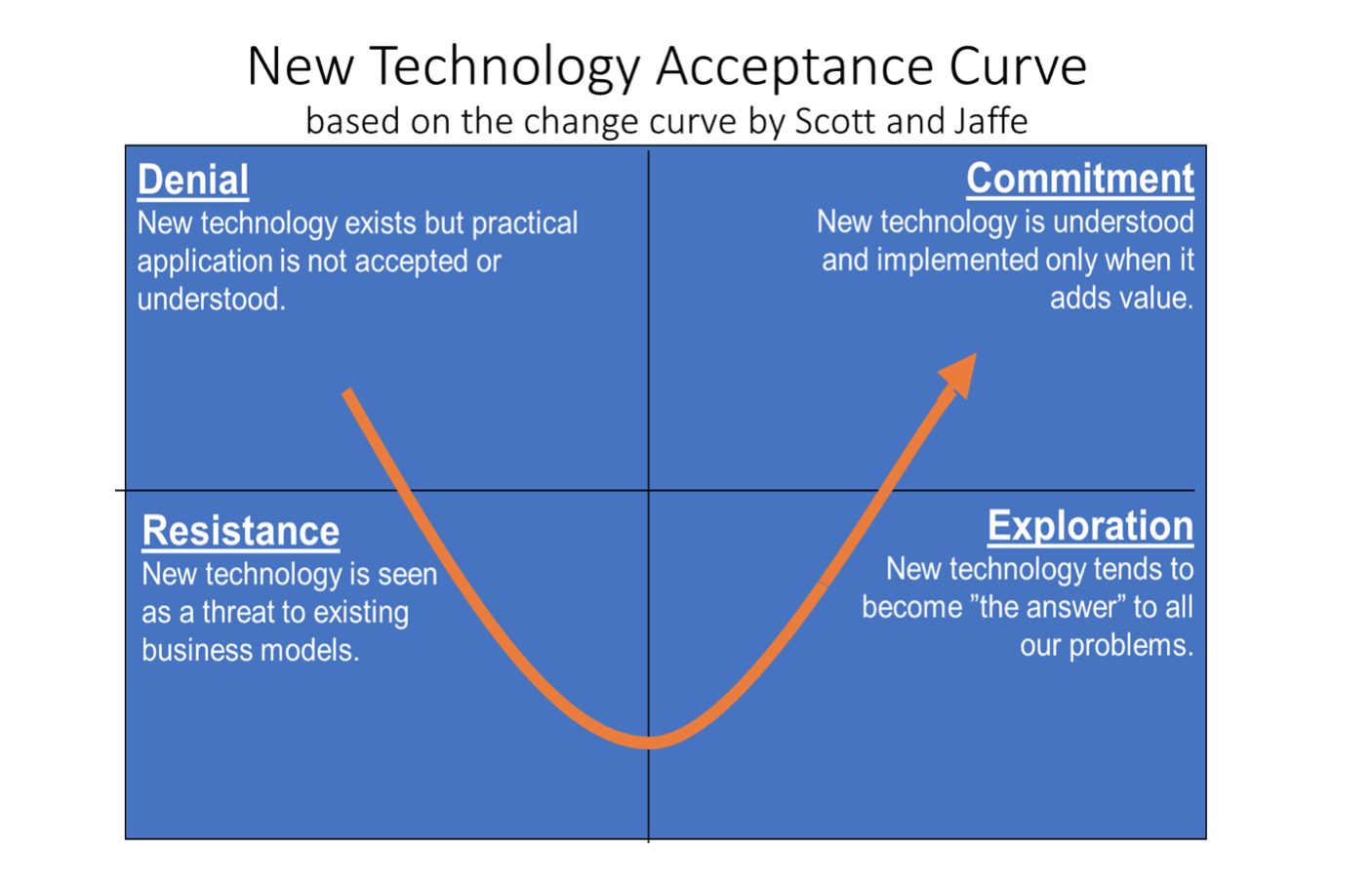 Digitalization, or the tools for digitalization, have existed for years and some industries have made more progress than others. In my blog post DIGITALIZATION – LEADERSHIP, EMPLOYEESHIP, AND THE ORGANIZATION from February 8, 2017, I discuss how the banking industry has capitalized on digitalization to improve their service to their customers while reducing their cost of doing business. But most industries, as well as, most government agencies, are just entering the exploration phase. At present, most organizations have moved past the denial phase where they generally don’t even understand the question and past the resistance phase where they begin to understand that this new technology might be a threat to their old way of working. Today, many organizations are firmly entrenched in the exploration phase where they tend to apply the new technology to anything and everything without understanding if the technology creates any value in all the various applications.

When my youngest son was about 4 years old he figured out how a crescent wrench works, but he didn’t understand what to do with it. He was fascinated by the crescent wrench and ran all over the house closing the jaws of the wrench on anything he could fit it on. We still have marks on our coffee table from his experimentation with this tool. Similarly, many organizations are experimenting with new digitalization tools and like my son and the coffee table these organizations will leave scars on their businesses in the form of wasted time and resources and significant loss of productivity.

The current digital technology bubble is the result of many organizations moving into an exploratory phase at roughly the same time. Most of these organizations don’t even realize that they are in the exploration phase. If you were to ask them, or at least their leaders, many would say that they are in the commitment phase. But often, these same leaders have a difficult time describing the value that will be created with this new technology or how the new technology will be implemented. The Swedish governments “Digitalization Strategy” is a good case in point.

The government presents several activities that should or will be executed to create a digital society, but it is difficult to find a clear description of the purpose of these activities. The main purposes that are given suggest that our government agencies will be more effective. There is also some notion that we have somehow “fallen behind” other countries regarding digitalization, but it is never quite clear in what way Sweden has fallen behind or why that would be a problem.

This is not atypical for the exploration phase. Our leaders have a strong sense that this technology is important and that something needs to be done so we don’t miss the digital boat, but they don’t really understand where the boat is going. This frantic activity to implement new technology, in this case digitalization, is what ultimately leads to the “bubble”.

When a technology first comes on the scene there are always a few “early adopters” who move through the technology acceptance curve faster than others. In the case of digitalization, banking and the travel industry might be two good examples of early adopters. The rest of society requires more time to warm up to the new technology. But when enough people or organizations become aware of the technology and the potential with the technology, the bubble begins. Suddenly, everyone is getting digital without really understanding what “getting digital” means or what it is good for.

Organizations are starting projects, consultants are re-tooling their skills and their marketing messages to ride the digital wave, and the race is on. If you ask anyone they will tell you that digitalization will make us more effective and it is a requirement for staying competitive, but very few can identify concrete quantifiable benefits that can be defined as measurable goals. I don’t usually argue that every goal needs to be scientifically quantifiable but I do think that if organizations are going to spend millions and even billions of dollars on new technology they ought to have a reasonably good idea about the return on investment. 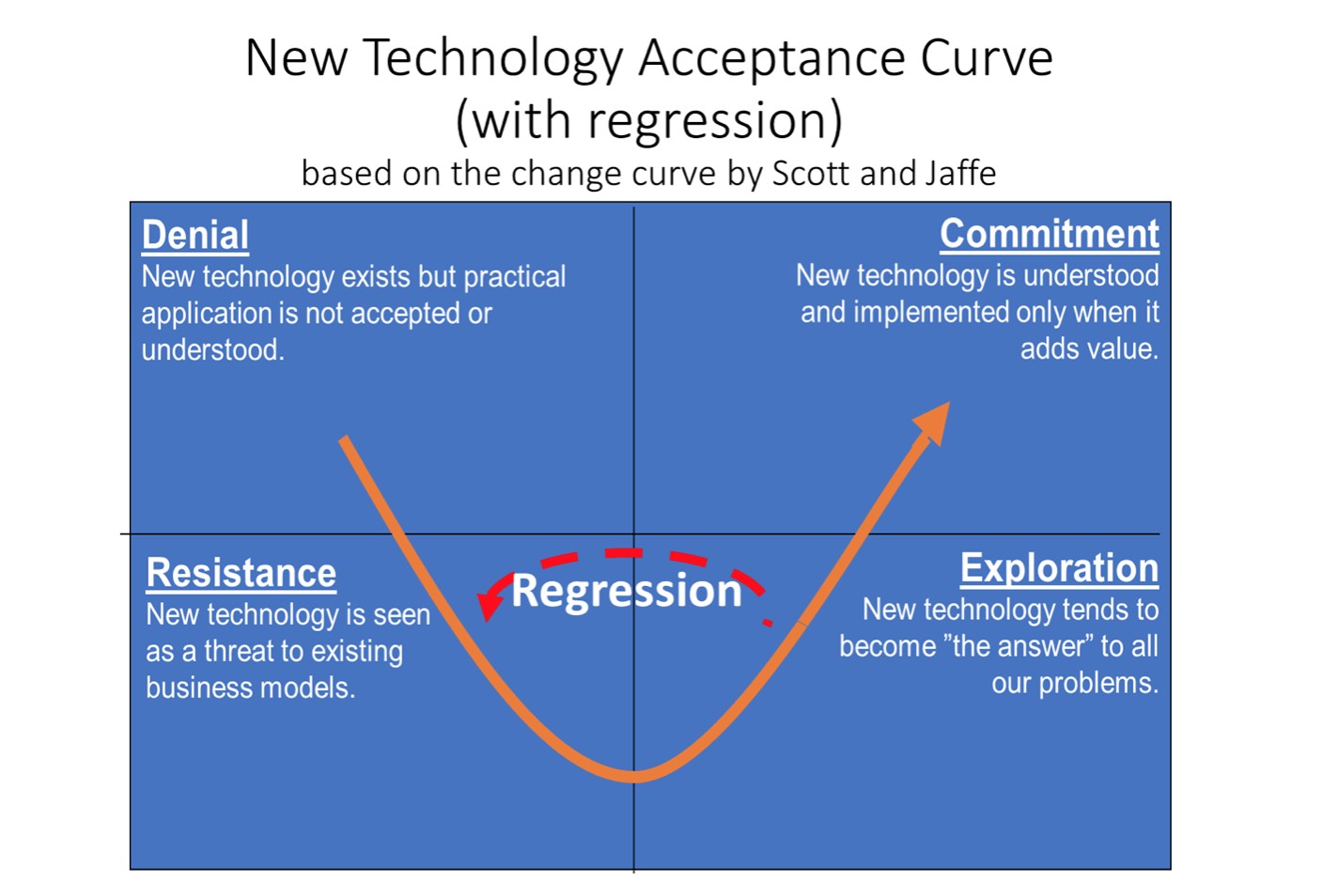 The usual way to present the change curve can lead us to believe that we always move on to the next phase when we have managed to get through the phase we are in. The reality is, however, that we frequently go back to an earlier phase or “regress”. The most common regression is to move from exploration or sometimes even from commitment back to resistance. This is usually the result of bad experiences. When the technology doesn’t work out the way we hoped it would, or it turns out to be much more expensive and complicated than we had expected, we can find ourselves back in the resistance phase. We decide that this “new technology” whatever it was, just wasn’t good or viable.

This is when the “bubble” bursts. When a large number of organizations have poured truckloads of capital and effort into the new technology and it doesn’t work out, they will often pull the plug on their projects. It usually starts with one or two high profile projects getting trashed. This becomes the que for everyone else who has been wondering what to do with the mess they have on their hands. Suddenly, projects are being cancelled everywhere, investments are being written off, and consultants that were previously hard to find, are suddenly out of work.

Those of us who have been through previous technology bubbles recognize the story. Many of us went through it with the internet boom. The internet was around for 8-10 years before companies really showed any interest in it and then everyone had to get in. After spending billions of dollars, we all stopped and looked around us and thought, “this is nuts!” The good news is that when we shook off the shock of our initial failures, we learned from them. Our next investments in the internet were smarter, more mature, and realistic. When you read old articles about the dawn of electricity in our homes and industry, or the invention of the automobile, you get a sense that the same things happened then.

The question is, can we avoid the exploration phase and the backlash that inevitably follows? Couldn’t we just skip this phase and move straight into a more mature implementation of digitalization in those areas of our business where they truly create the most value? As enticing as this idea may be my suspicion is that we can’t skip the exploration phase entirely. The exploration phase is part of our learning process. We must play with this new technology for a while to understand its true value. What we can do is strive to minimize the costs and damage to our business while we are experimenting.

My work as a public speaker and management educator in change management and leadership has given me an opportunity to see what is going on inside many large organizations and what I see is frustrating.

I have seen government organizations who have been tasked with “getting digital” by the political leaders, without really understanding what it is exactly they should digitalize. In Sweden, you can find numerous examples of this just by following the news. For example, there have been ongoing efforts to create digital patient journals for several years and on the whole the results haven’t been inspiring. There are other examples from the police and military, as well as many other government agencies who have failed attempts of digitalization in their baggage.

But let’s not fall for the illusion that these failures only happen in government agencies. Corporations have the same skeletons in their closets, the only difference is that they don’t get the same publicity for their digitalization failures. I see large corporations investing staggering amounts of money in digitalization projects with only the vaguest idea of the value these projects will create. Many of us have experienced the frustration of being a customer to corporations as they attempt to digitalize much of their customer service.

Following are 5 tips for being more successful in implementing new technology like digitalization into your organization.

Learn from others. There are very few instances where being first with the implementation of new technology gives any significant long-term advantages. Study what other organizations are doing, what works, and what doesn’t. Try to adapt their experiences to your own business.

Limit the possible negative effects of your experimentation/exploration phase in the same way you would control a scientific experiment. Test your ideas on a small scale before you implement them throughout your entire organization. One of the easiest ways to do this is by executing trials and pilots.

Don’t be afraid to pull the plug on your ideas when they don’t work out.

Take an experimental or iterative approach. Let’s face it, we are talking about new technology. The likelihood that you get it right the first time is very small. Instead of expecting great results and being disappointed, expect only to learn. Take what you have learned, redefine your goals and try again. Keep trying until you get it right. When you have it right, then you can scale your pilot up to a full-scale implementation.